Campo de’ Fiori, one of Rome’s most famous public squares, buzzes around the clock. Once a site for public executions, today it’s a bustling cultural and commercial center that draws tourists by day and a young crowd by night. With its many restaurants, cinemas, theaters, nightclubs, bakeries and boutiques, it’s easy to see why.

We had visited before, but it wasn’t until we stayed nearby that we started to understand the cyclical nature of this special place. Nearly every day begins before dawn when the market is constructed, not long after the last group of revelers has made its way home. Round and round the days go, but thanks to the people, it never seems to get old.

Here are some of our favorite ways to blissfully pass the time in and around Campo de’ Fiori.

Mosey Through the Market

Every morning except Sunday, starting at 7 a.m., the empty square is transformed into a full-fledged open-air market. Sure, it feels pretty touristy, but the market is an excellent place to get your morning dose of vitamin C, mingle with cheeky vendors and stock up on souvenirs. (Think novelty pastas, olive oils, spices, clothing and accessories.) Just make sure you go earlier in the day – at 2 p.m., the entire market is deconstructed, a somewhat chaotic process that involves cargo trucks and the sweeping up of debris. There are much prettier things in Rome to see. 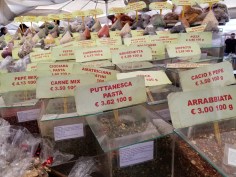 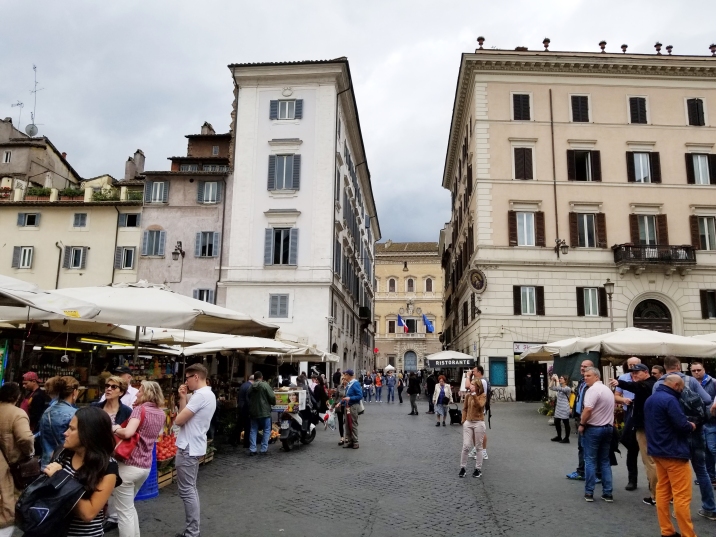 Get a Caffeine & Sweet Fix

If you don’t adopt the daily coffee rituals of its people, do you even experience Italy? There’s something so satisfying about sipping a cappuccino or caffe latte in the morning, by itself or accompanied by a fluffy pastry. We fell in love with the coffee and traditional treats at I Dolci Di Nonna Vincenza, a chic little shop hidden a few blocks from Campo de’ Fiori. We admit we had cannoli for breakfast – pistachio, chocolate and lemon ricotta – but if you aren’t into an a.m. sugar high, there’s always takeaway.

Most of Rome’s iconic sites are walkable from Campo de’ Fiori, but Piazza Navona and the Pantheon are literally five minutes away. Piazza Navona, a long baroque square that stands where Julius Caesar’s stadium once did, is home to three beautiful fountains. Around the corner sits the Pantheon, one of Rome’s best-preserved ancient buildings. With its granite Corinthian columns and concrete dome, it’s a magnificent reflection of Roman architecture. On the way back to Campo de’ Fiori, you can swing by Porticus Minucia, a small set of ruins built in the first century. 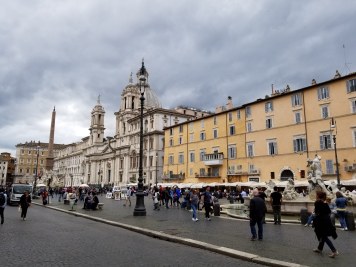 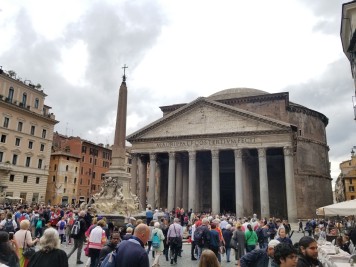 We eat pizza at least twice a day while in Italy, so the competition for our favorite is stiff. Antico Forno Roscioli, a Roman institution, puts up a good fight. Marked by giant yellow letters spelling F-O-R-N-O above the street, Roscioli is where locals and tourists go for pizza bianca, always-fresh bread and traditional pastries. Squeeze your way through the crowd to the pizza counter, and you can choose from thick, square slices loaded with sausage, mushrooms, pesto, mozzarella and whatever else is on the cutting board. There are a few indoor bars to stand at, but we prefer the fresh air and cart tables outside. 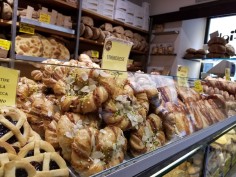 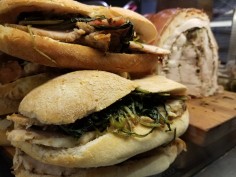 Like pizza, we eat gelato at least twice a day when in Rome. (How else will we determine which flavor is best?) We haven’t had a bad cup or cone yet, but the gelato we had at Fatamorgana near Campo de’ Fiori was especially inspiring. Made with natural raw materials using traditional Italian techniques, the flavors at Fatamorgana range from expected to experimental. We like pairing a classic one with a specialty one – vanilla bean and carrot cake, chocolate and blackcurrant, pistachio and honey, we could go on and on.

People Watch With a Pick-Me-Up

With its winding, uneven cobblestone streets, Rome can be hard on your feet. Taba Cafe, an eclectic and friendly spot, is the perfect place to take a load off any time of day. An outdoor patio situated right in Campo de’ Fiori makes it an especially good place to people watch, too. We love hanging out on the antique sofas or swing chairs (weee!) with a cappuccino in the morning or an Aperol Spritz in the afternoon. A creative specialty cocktail list and well-rounded craft beer list also make it a good place to hang out into the night.