As far as urban hikes go, Elephant Mountain has it all: Easy access, gorgeous flora and fauna, and sweeping views of the city down below. We were ready for a respite after a few days in busy Taipei, so we laced up our shoes and headed out the door.

After a quick ride on the MRT, Taipei’s metro system, we arrived at the Taipei 101/World Trade Center station in the Xinyi District. The skyscraper, which was declared the world’s tallest when it was completed in 2004, was just a few steps away. We stood on the sidewalk and craned our necks at its 101 floors. The green building resembles a bamboo stalk and represents a worldwide precedent for sustainable skyscraper development. We considered paying to visit the observatory on the 89th floor (the elevator takes a remarkable 37 seconds to ascend), but decided it wasn’t worth it due to the smog. Instead, we started walking toward the Xiangshan Hiking Trail about a mile away.

After several blocks and turns, we arrived at the stairs at the foot of the trail. (Note: For detailed directions, see the end of this post.) We had seen several groups of school children heading toward the trail, likely on a field trip, and we were determined to beat them to the top. We stretched our legs and began our rapid ascent. Immediately, we found ourselves surrounded by lush tree ferns and the sounds of tropical birds. 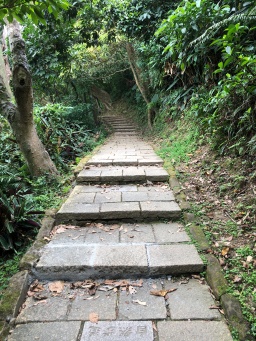 Fifteen minutes and hundreds of stairs later, we reached the top. Unaccustomed to the humidity, we were dripping with sweat, but it felt good to be away from the chaos of the city. We wandered around the viewing platforms and snapped a few pics. Taipei 101 jutted out above the smog, which was bad but not at its worst. It was amazing to see a building we had stood at the foot of moments before from so far away.

Had we wanted to, we could have continued on the trail for another two hours, ascending even more stairs and ending up at Jiuwufeng, the pinnacle of Taipei’s Four Beasts. The trail system, on Taipei’s east side, includes Elephant Mountain, Tiger Mountain, Leopard Mountain and Lion Mountain. However, due to the smog and time of day (afternoon), we decided to head back down. If we were to do the hike again, we’d do it first thing in the morning so we could travel farther, or during sunset when the views are said to be at their most beautiful.

Two ways to get to Elephant Mountain: